Heading out tomorrow morning (at the airport for 5am :â€™-[) to fly to Pisa, couple of days getting used to the weather then travelling down the coast to Rome by whatever means possible, hopefully achieving our Explorer Belt!

Iâ€™m going to try and keep a diary of what we do each day, then post on here when I get back. However we may end up too lost/drunk/dead to actually bother writing!

P.S. Twit2MSN V1.3 now released â€“ should appear in the database some time whilst Iâ€™m away!

This article, headlining on the Daily Mail tomorrow I believe, has particularly annoyed me this evening.

From my experience, this kind of event happens pretty much every night on university campuses up and down the country without making headline news â€“ just because this happened to be an official gathering of Scout Network members makes it wrong? Everyone at the event had to be over 18, all licensing laws were adhered to, no-one started smashing up a kebab shop afterwards. The only damage caused was a few dead brain cells!

I donâ€™t have a particularly strong view on posting such photos on Facebook â€“ but I presume they were posted with some privacy, which the Daily Mail has now breached by publishing them in a national newspaper. Those people did not ask to have their photo plastered on Facebook, nor was permission sought (a grey area), but using these as published material attributing the source to â€˜Facebookâ€™ is very very dodgy practice.

The father of one of the revellers said: ‘It’s really let their image down so badly, the fact there’s a seedy side to scouting. I can’t believe HQ didn’t put a stop to this whole sorry mess.’

Looks like a great party. I never knew Scouts were so "with it!" Where can I join?

18-25 year olds donâ€™t necessarily want to spend every night â€œgathering round the campfire and singing Ging Gang Goolieâ€ â€“ Scout Network wouldnâ€™t exist if thatâ€™s all we did! That said though â€“ the Mail didnâ€™t notice the photos published on the MAD UK website of people â€“ wait for it â€“ gathering around the campfire and singing Ging Gang Goolie!! Do your research!

The best comment so far sums up my argument completelyâ€¦

They are young people enjoying themselves. What is wrong with that?

I await a response from Gilwell with bated breath â€“ I hope they donâ€™t cower down under media pressure, and instead defend what Scouting is all about â€“ letting us â€œtake acceptable risks and think for themselvesâ€ (Official Scout Association description) 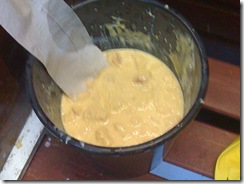 That concoction wasn’t for eating, by the way… it was for Explorers to stick their heads into, in order to retrieve Midget Gems sunk at the bottom. Seemed like a brilliant plan for an activity, until people started throwing the mixture around!

Anyway, hopefully some of the wee explorers got an idea at what crazy stuff we get up to in Network, and will want to join. If not – we got to make some stupid mixtures, and then had an excuse to go to the pub! Sorted!

Monday brought a Music Tech day, with people from Huddersfield Uni coming in to talk to us about their course basically. Then some practical workshops, which were a bit useful, but not very! Could have spent the day better by doing my coursework. Which brings me on to…

Tuesday. Tech coursework. Managed to get Task 5 pretty much complete, but I bet that Slim MT will butcher it tomorrow! Did some more work on my Task 1 (multitrack), trying to get vocals to sound good. Don’t think that’ll happen! Came home and did some Maths work, what fun!

Wednesday (Tomorrow/Today). Tech coursework. Hopefully will get Task 1 and 3 complete, and then work on 4. Fingers crossed I may finish the coursework part of the course! Probably some Maths/Computing when I get back.

Thursday. Driving lesson + maybe cinema in the afternoon (if I can afford it!). Need to try and get a hair cut as well!

Saturday. Some sort of Network workshop. No idea what it is, but its region-organised – so probably a load of bollocks. Hopefully will end up in a pub though!

Sunday. Cheshire Hike base with McNetwork. Going to be a fun day – that’ll definitely end up in a pub!

Monday. In school for Computing probably.

And then its back to school

Been camping again, Barnswood this time, "running" the home base for the Cheshire Hike practice with McNetwork.

Not a lot of work, just a hell of a lot of lasagne. Lots of lasagne. 3 trays of it to be precise… we’ve been eating it for dinner and tea the past 3 days!

Was a fun weekend (besides the food :P), watching a few films, drinking. The usual!

Think the downfall of the weekend for me was fruit cocktails. Found a Margarita maker in Netto for £7 (basically a blender made out plastic) and then preceded to put fruit and booze into it. I thought it would be healthy – not deadly! Lesson learned.

I am back from Group Camp 😀

Andddd I’m off to bed! Ciao!

Well, off I trot to group camp again this weekend.

Fortunatly, some of the network members are there as well – so I’m not on my todd all weekend!

I will be back Sunday afternoon, and am leaving at 3.30pm today (crap… thats in less than an hour!)

See you all soon!

Got back yesterday from a nice weekend camping with Scout Network.

There is definitly something to be said for having a rave in a marquee at 2am! Absolutely brilliant weekend, but I’m knackered now!

Anyway, getting back into the swing of revision tomorrow, since I do have a 2 Physics exams and a Maths exam in about 9 days 😐 Not good!

Spent a lot of today working on the Bristol-ATC forum, added some new stuff onto it for a change!